FITS™ is the third generation of the FDT specification. The concept for a client server / architecture, which is already available in the FDT version 2, will be systematically continued to be used in this version. FITS enables access to device drivers (DTMs) from mobile devices (web-based), as well as via OPC UA. FDT becomes platform independent by migrating the fundamental technology on which it is built from the Windows based .NET Framework to an open .NET Core as well as HTML 5 and JavaScript.

The concept of FDT IIoT Server (FITS) was created to prepare the FDT technology for a digital future. Through surveys of FDT Group members it became clear that certain extensions of the standard are necessary in order to adapt FDT to the changing environment and emerging user requirements. However, investment protection and interoperability with existing FDT products are also important aspects.

After an initial vision of the concept had been drafted, various working groups (each with M&M participation) within the FDT Group became active and developed a concrete and implementable specification based on this vision.

The way to FITS

The first FDT server prototypes with a focus on "Web interfaces for DTMs" were already implemented on a trial basis in 2017. The project was started with the intention to access devices and offline data sets contained within a DTM via common web browsers (and thus from different end devices).

In order to keep the migration costs manageable, the FDT Group requested that the business logic of the DTMs be kept as unchanged as possible compared to the FDT Specification 2.x.

Regarding the technology platform used for FITS, it was decided - after a survey among FDT users - to migrate to .NET Core. This required some modifications to the FDT specification.

The current FDT specification (version 3.0) has undergone a thorough member review and is expected to be released by the end of 2019.

The FDT IIoT Server has already been adapted by M&M to the current FDT specification and serves as the basis for the upcoming prototyping. Long-term stability, performance and security will be further optimized and subsequently finalized.

Figure 1 graphically illustrates individual components of the overall concept of FITS. Inside are the core server (the implementation of the FDT frame) and the interfaces to OPC UA and the Web. These components represent the FDT server currently being developed by M&M. 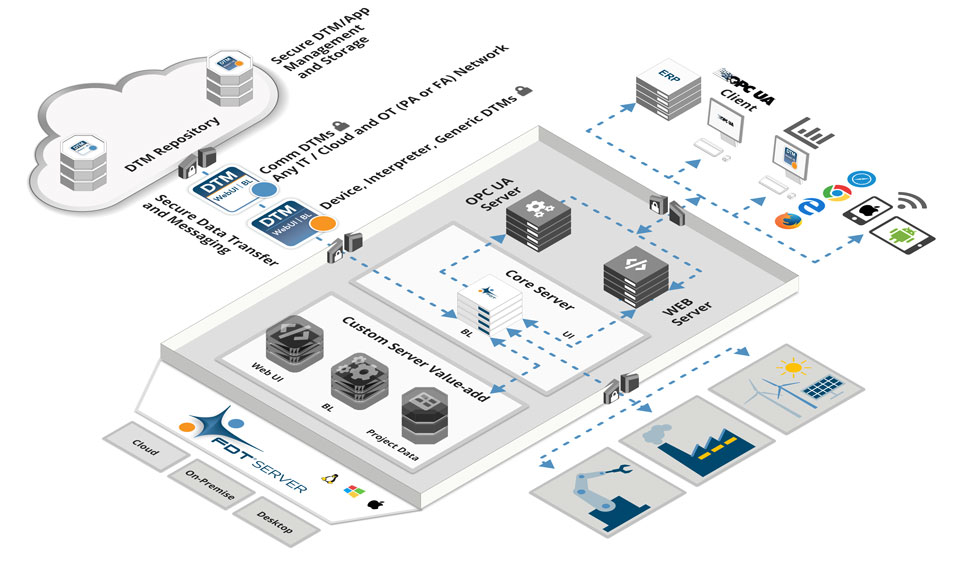 Due to the implemented OPC UA Companion specification for FDT, applications can access the DTMs via OPC UA. Existing FDT2™ DTMs can also be used here without any problems, if the FDT IIoT Server runs on a system based on Windows. This allows the DTMs to be integrated in many applications in which OPC UA is used for data exchange or for executing device-specific functions.

The user interfaces of an FDT DTM for FITS are created with HTML5 and JavaScript. Accordingly, the FDT IIoT Server runs a Web Server from which theseDTM user interfaces are being served. Thus, end users can now access the GUI of the DTMs from any end device.

With open interfaces such as OPC UA or the Web Server, security plays an important role. The FDT Group has taken this into account by setting up its own security working group, whose work also influences the development of the FDT IIoT server.

The DTM Business Logic Objects and the FDT Frame are developed in FITS based on .NET Standard or .NET Core. Thus, the FDT IIoT Server can be operated not only on Windows operating systems, but also on Linux for example. This opens new possibilities for the architecture of an FDT-based system.

With all these innovations, the advantages of FDT remain unchanged, such as the possibility of offline parameterization, access to devices through network hierarchies ("Nested Communication") or the open concept for the integration of fieldbuses.

The practical implementation of the FDT IIoT server is of a modular design. This allows users to decide for themselves whether to use the server "Out of the box" or to implement individual parts such as the OPC UA Server or the Web Server itself. A future expansion should also offer the possibility to develop application or manufacturer specific apps. These cloud be very specific application (e.g. fast display of the device or system status) and make proprietary functions of a manufacturer specific device accessible.

The FDT IIoT Server will be available as a product from the FDT Group (www.fdtgroup.org).

Consulting, workshops, customized builds etc. around the FDT Server are available at M&M Software. Volker Herbst vht@mm-software.com  and Christian Gnädig cgg@mm-software.com will be happy to answer your questions and provide further information on what is possible.

M&M Software is working actively with the FDT Group to bring innovation to your products. Our experience with industrial IoT and FDT will help you get your FDT IIoT Server (FITS)-Strategy ready today.